„Gettting to know our Muriel“

You have been largely inseparable from your twin sister until now. What is it like to be without her for such an extended period of time?

It’s an odd feeling to have our lives moving in such different directions when we were more or less together for the first 22 years of our lives. We’ve had to learn how to communicate in new ways; suddenly I have to remember to give her updates on my life, since in the past we’ve always been present for all the big and small things. I appreciate talking to her about big decisions (I called her when I was trying to decide whether I should accept the Fulbright grant!) since she understands the way I think (and overthink) better than anyone. Being long distance is good and hard and a part of growing up, I guess.

You could have gone to so many wonderful places in the world through Fulbright. Why here? Why the Czech Republic?

I chose to apply to the program in the Czech Republic for several reasons. First, my research interests in my master’s degree centered around war history of the 20th century, and the Czech Republic is right in the middle of WWI/WWII/The Cold War. I was interested in living in a country that was steeped in the history that I’m only familiar with as a cultural outsider. I was also looking more generally for a program in central Europe, and the resources available about the Czech program revealed that the Fulbright commission here has an extremely well-developed program and is thoughtful about its placements.

What kind of literature do you enjoy reading the most and why? Do you have a favorite Czech author?

I tend to gravitate towards 20th century works influenced by the environments of WWI and WWII. I’m fascinated by the way that the modern and postmodern literary movements seek to define and express the trauma of the 20th century. My biggest project in my MA was looking at the way that WWI texts reexamine the martial homecoming narrative established in The Odyssey, and how the sense of personal and collective fragmentation is expressed in texts like Joyce’s Ulysses, Eliot’s The Waste Land, and Hemingway’s The Sun Also Rises, among others. That’s the general type of literature that’s been milling around in my mind lately. I have other interests too, like 20th century African American writers, Holocaust memoir, and contemporary essayists. There’s so much great stuff out there. I remember a professor suggesting a book and then telling me how jealous he was that I was about to have the experience of reading it for the first time. And I think about that a lot.

You are used to running in flat places? What is it like running here?

I’ve had some great runs on the bike path along the river. That trail feels like home to me in certain sections (anything bordered by corn). But big hills and rugged terrain are new to me, and it’s pretty fun to have a new challenge that makes me feel like a total beginner again. I recently ran the Emil Zatopek half marathon that starts in Kopřivnice and ends here in Rožnov… and that may be the biggest hill I’ve ever run. That was really tough. But I’m excited to try more trail running in the next couple of months.

You are often seen walking around town wearing a huge backpack? What is in it?

You know, I think American backpacks might just be made really big. I wish it was something exciting, but I’m usually carrying my lunch, school textbooks, a novel, a water bottle, maybe a jacket… just ordinary stuff.

You say you like playing piano. What kind of music do you enjoy playing the most? How long have you been playing?

I’ve played the piano since I was six, although I stopped taking lessons in high school. I played for my church in college, and currently I like to play whatever song is stuck in my head. There’s a lot of ABBA in there. I recently started playing bass guitar too, but it’s not the most portable instrument so I’ll have to resume practicing when I return to the states!

I’ve loved the students and teachers I get to work with here! I’ve enjoyed getting to participate in the school community with so many intelligent students. It’s also a pleasure to live right next to so many trees and trails- leaving the sidewalk city of American suburbia has been a fun change. My least favorite part of being here is just the general struggle to communicate in some basic situations, like opening a bank account or asking how to find something at the grocery store. I’ve needed a lot of help in situations that would ordinarily be pretty easy stuff, which is humbling.

What would students be surprised to find out about you? Eg. Do you have a hidden talent?

Hm… I think knitting might be my biggest hidden talent. It’s very repetitive, and at this point I can do it with my eyes closed, so I’ll pick it up when I’m reading or watching TV. I’m working on a baby blanket for my pregnant cousin right now. She’s due in February, so I’ll be looking for a new project soon.

Do you have a favorite Czech word or saying?

The tongue twister “strč prst skrz krk” makes me laugh. (Where did all the vowels go?)

What can you cook to perfection? Would you share a recipe? I am asking because we have a lot of gluten free students at our Gympl 🙂

If I was in the US right now, I would be baking a lot of pumpkin chocolate chip bread. But since I don’t currently have an oven, one of my favorite things to make is savory oatmeal- you cook oats in chicken broth, then serve them topped with roasted sweet potato chunks, avocado, and a fried egg. It sounds weird but I think it’s great.

What current student trends are baffling to you?

Honestly, TikTok. Sometimes I worry about the fast pace of modern life and our general inability to slow down and focus on something for more than five minutes. And TikTok is the ultimate medium to cater to our dwindling attention spans… but it’s also pretty funny. I have mixed feelings about it. Also, I’ve never been into crocs.

If you could take the students on a field trip anywhere in the world, where would it be?

It’s not particularly exotic, but I think it would be really fun to take a field trip back to my college town of Tulsa, Oklahoma. It’s a cool convergence of Native American culture, the American west and cowboy culture, the oil industry, art deco architecture… and I think it would be neat to revisit the town and university that shaped so much of my attitude towards academics and towards American culture in general.

In which Hogwarts house would you be sorted?

I like to flatter myself that I’m similar to Hermione… so I have to say Gryffindor with a hint of Ravenclaw. The official online Pottermore quiz confirms this, and also told me that my patronus is a salmon. I’m not sure what that says about me.

If you could grow up in any decade, which would you choose?

No decade is perfect, and I’m kind of partial to modern conveniences, so my impulse is to stick with what I’ve got. But I also think it would be really interesting to grow up in the American 1960s and watch the civil rights movement unfold in real time.

What is a question you have been prepared to answer for years but no one has asked you yet?

Thank you for asking! No one has asked me whether I regret ending my soccer career in kindergarten. And I really wish I had played soccer as a kid, because now I am stuck with horrendous ball handling skills as an adult. Maybe someday I’ll make up for lost time, or maybe I’ll just remain an enthusiastic spectator. 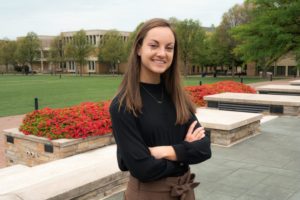