For this particular Gustav edition of the “English corner” I have decided to write about Billie Eilish’s influence on this years “Met Gala” that took place on September 13th at the Metropolitan Museum of Art in New York.

In short, the Met Gala is the most anticipated fashion event of the year and is organized by the one and only Dame Anna Wintour, whom you can read about in my last article “The Wintour in our closets”. On the Vogue website they describe the Met Gala as the “fashion world equivalent of the Oscars”. It is an evening for the honored guests (be they actors, models, Hollywood stars or for the first time ever Tick Tockers and youtubers) to collaborate with the best designers in the world and dress in the most extravagant outfits they can think of. Typically, everyone dresses to a theme, this year it was: “In America: A Lexicon of Fashion.” Though it was a broad theme many designers and celebrities sought inspiration from the glamour of old Hollywood. However, watching celebrities dress in excessive clothing isn’t the purpose of this occasion. The goal of this prestigious gala is to raise money for the new MMA’s Costume Institute exhibit through ticket sales, that cost roughly 35000$ a piece. But in the end, what everyone is curious about the most is the guest list, because to actually get an invite from Anna Wintour is the honor of a lifetime.

The American singer and songwriter, Billie Eilish, whose songs we all know and love, was one of the few celebrities who actually stuck to the dress code of this year’s theme. The 19 year old, vegan, animal rights activist and most importantly Grammy winner, wore two dresses to this year’s Met Gala. The first, being an elegant peach colored Oscar de la Renta layered tulle gown with a 4m long train, inspired by the dress Marylin Monroe wore to the Oscars in 1951. And the second look, that she changed into once inside, a sheer red cape dress, inspired by the Hollywood icon Grace Kelly in the 1955 classic, To Catch a Thief. To complete her look 30 pieces of Cartier jewelry, including 25 rings – the most ever worn by a starlet on the red carpet. All and all, Billie looked classic beyond her years rocking a vintage bob haircut and a simple red lip.

The story of these stunning ensembles coming to life is a bit more costly than you might imagine, at least for the designers, the creation of the gowns came at an unexpected price. After being asked to wear the Oscar de la Renta label at the Met, Billie answered with a power move and gave the brand an ultimatum. She agreed to only be dressed by the label if they, in turn, agreed to ban the use of animal fur throughout its business. Per Eilish’s request the fashion house is going completely fur free!

Later, on Instagram, Billie shared a shot of her stunning dress at the Gala and wrote:

Many people, myself included, think that it is high time for fashion brands to stop using animal fur in their clothes. Especially since there are various natural fabric brands can choose from instead. Billie Eilish is helping our environment by changing one fashion brand at a time. She is on her way to becoming an icon just like the great Hollywood stars, Grace Kelly and Marylin Monroe, she adores. In the future I will definitely keep an eye out for her and am looking forward to seeing what she will surprise us with at next year’s Met Gala. 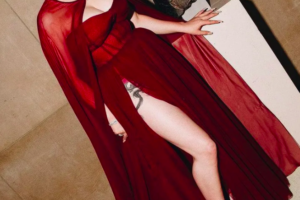 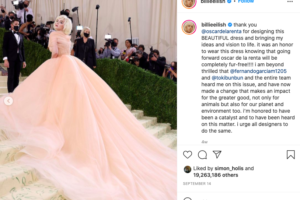